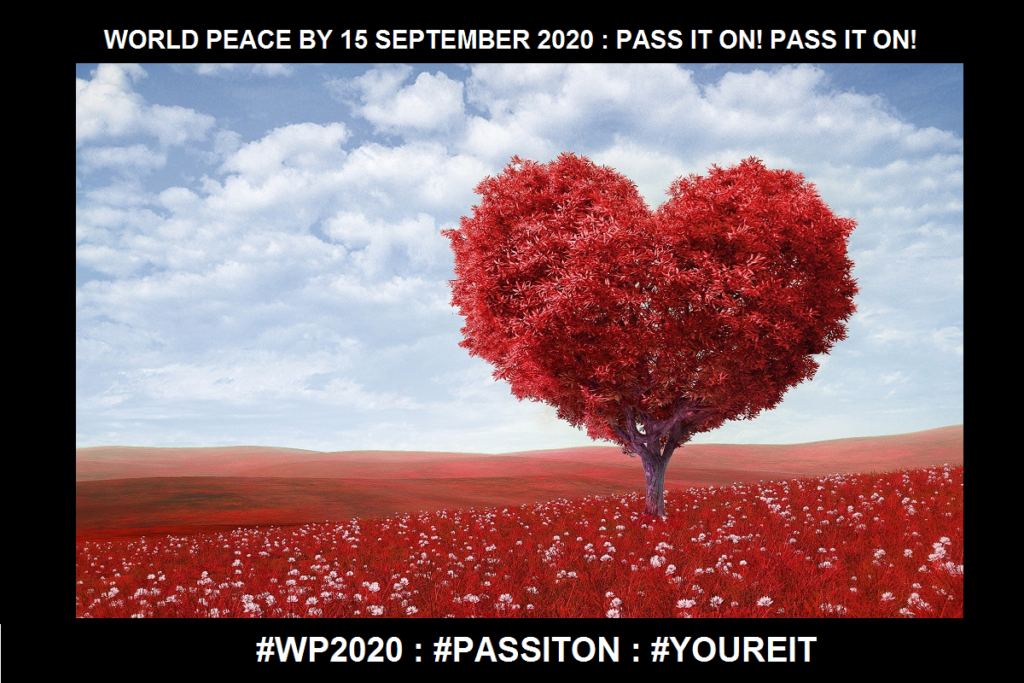 Stand: An attitude towards a particular issue

After I completed my Landmark Forum in October 1993, I discovered that my thought: “My mother and father don’t love me!” was false. I truly believed that they loved my younger smarter fitter brother more. I was embarrassed, ashamed and confronted to even think those thoughts back then! Wow, moments in our childhood can really impact our lives!! OK, well if we are all ‘grown-up’ by around 24 years of age, what was my parents’ childhood like?

Oh, oh, World War II right of both of their doorsteps ,when they were kids. From this insight, I immediately took an inspired stand: To Stop the World Fighting for a Day! I so felt this would be a lovely way to redeem my silliness in my childhood, believing I was ‘unlovable’ and therefore really keeping my parents at bay.

CEASEFIRE PROJECT: The Causing of World Peace (By 2020) through the Use of Fire

This stand started on the 15th September 1995, after my press release to all 5 national television news companies in Australia attracted a Channel 10 film crew to meet some 27 or so fire breathers at the Opera House steps at midnight. Significantly it marked exactly 5 years before the opening ceremony of the Sydney Olympic Games and it was performed as a stand for World Peace by those games. Apart from gaining national news, CNN News picked up the story.

How did I find out?

My sister’s 10-year-old son was watching the news on cable television in Brunei when he turned to his father and said: “Dad, its Uncle Charles on tv!”

I then took a stand to perform fire breathing shows every year on the same date and invite the television cameras to document the show and our record-breaking attempts for the greatest number of fire breathers gathered together to perform the shows.

Channel 7 and Channel 10 camera crews showed up at the northern end of the Sydney Harbour Bridge at sundown and it was noted we did not have the numbers to beat the 92 fire breathers at the Sydney Opera House Stairs the year before.

I recall being confronted and embarrassed I have gotten the tv crews down and I fell back to my thought that I was a ‘failure’. Indeed, I discovered in the Communication Course: Access to Power, that when I was aged 10 years old, my younger brother got picked for the school soccer team and I didn’t get picked! In that moment, I decided that I was a failure.

Luckily, the ‘ever pervasive past’ thought only lasted for around 5 minutes.

I then gathered the fire breathers together, honoured them for showing up, turned to the camera crews and apologised for the reduced numbers, promising a fire show anyway and requested we all return in exactly two weeks to mark the end of that year’s Olympic Celebration and, true to form, Channel 10 TV News captured the moment when we performed a Fire Breathing Mexican Wave across the Sydney Harbour bridge. The funniest part was the moment when the fire brigade showed up after someone said the bridge was on fire! I have forgotten to inform them!

Stand: A position taken in an argument.

Whenever I declare my stand for World Peace by 2020, there is an ‘immediate’ thought. I often continue with my experiences and potential solutions and ‘off we go’ into the possibilities or indeed resignations concerning the stand. What I have discovered in ‘being a stand ‘is noticing the times when I am not being “World Peace by 2020”.

Indeed, only last Sunday, 15th September 2019, I got into an argument with a friend, who had turned up for the Peace Ceremony and had not fulfilled on her promise to help me film the good moments of the day, (later I saw I was not clear in my requirements).

Interestingly, the Wisdom Unlimited course I am currently engaged in reminds me how often I ‘drop down’ to conversations 7-year-olds have which is in the domain: “Fair/Not Fair!” Using “Adult as possibility”, I saw I was definitely being 7 years old with my friend and that from her point of view she was being fair! Phew, I apologised for not being World Peace by 2020 and our friendship was restored!

How often do we get misunderstood, because we don’t share our stands about ‘the matter at hand’. Suddenly we find ourselves in arguments centered around the matter, where, perhaps, clear boundaries have not been established. Whilst it may not be a ‘common declaration’ to share one’s stands in life, I invite you to consider that whenever you declare a stand, you provide an opportunity for people to get aligned, support you or indeed start an argument! World Peace by 15 September 2020 to you all!