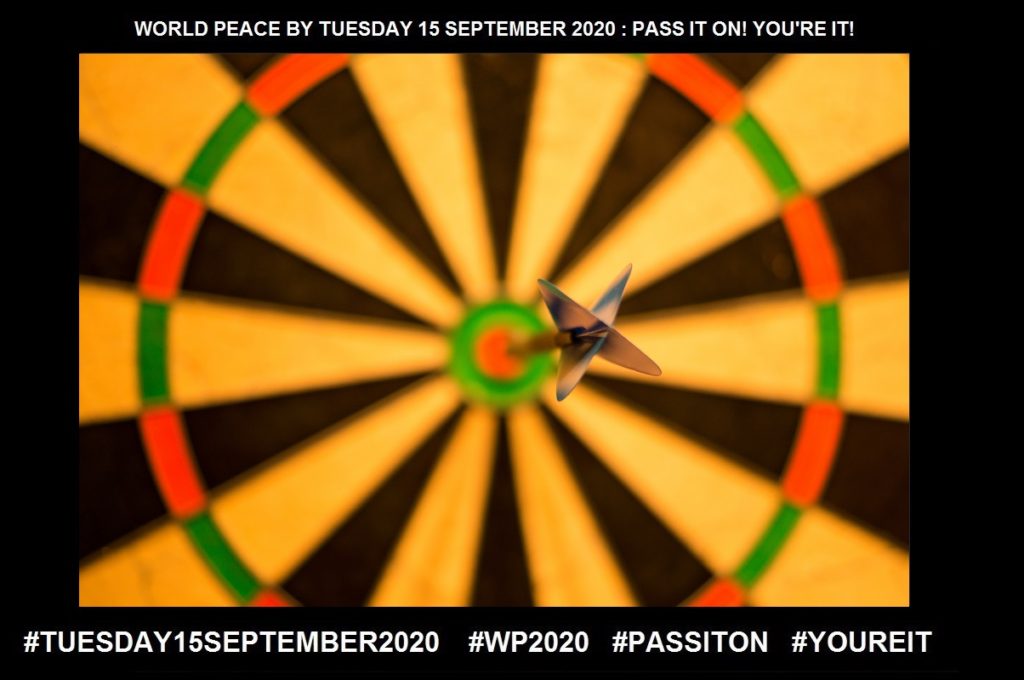 With my experience in personal development over the years through Landmark Worldwide, the word “goal” rarely came up in our inquiries, with taking a stand (read more here) and specific measurable results being as close to “goal” as I recall.

For myself, I have been standing for World Peace since the 15 September 1995 when some 20 of us fire breathers performed at the Sydney Opera House, with “world peace” declared in all the press releases I sent. The Channel 10 news crew came down, filmed it for national news and we went global through CNN news too.

From that day onwards, I was a stand for World Peace and on 15th September 2000, I declared “for the next 20 years” on national television. (see 2019 updated version)

From anywhere from one to 5 or 6 times a week, depending on the season, and since 2005 when Charles Crawshaw moved to Ocean Shores, he has been running on bouncing boots ( see here ) and is a “well known character” of the 4000 homes there . Fairly recently, he started updating his costume with World Peace By 2020 on the backside of his shorts, a World Peace by 2020 cape with “Pass It On!” And “You’re It” tagged onto the symbol and his new backpack now carries nations flags. Once it was: “Ooh you’re the bouncy boot guy” to now people driving by shouting: “ World Peace by 2020!” and “instagramming it”  *

I ran this flag to remember the 57 lives ended through Wednesday’s plane crash. Beautifully, during my run, I was able to share with several groups of beach goers and indeed, friends afterwards picked the reason for that flag. Peace be with you all!

The newly elected 34 year old female leader for Finland is known as the “Jacinda Ardern of the north!  Jacinda is New Zealand’s championing leader (“of the south”…..urm Game of Thrones crew, thank you!) Between them, we’ll have World Peace by Tuesday 15 September 2020 SORTED!

I honoured and shared about her, on my rare Byron Bay Lighthouse run, remarkably having 4 visiting South Koreans recognise the Finnish flag! We chatted about my stand for World Peace and it ended when I said ‘Thank you” in Korean. It received brilliant smiles!

For your information and the story of the Romanian flag starts with me declaring that I complete my consecutive Wisdom Unlimited course this Saturday 19 January 2020, with a moment I will CHERISH FOREVER.

Thanks to the Wisdom program last year, I have been running many national flags around my regular Ocean Shores community roads, paths and beaches. I am a well known for connecting these flags with my stand for World Peace.

THE MOMENT happened last Sunday when I ran a Romanian flag , sitting in my purpose built backpack.

The afternoon was sunny and beautiful and South Golden Beach had many Australians enjoying the surf and sand. The wind was a healthy ‘southerly’ meaning my “wave chasing bounce” along the hard sand on the beach had the Romanian flag fly parallel with my southward running direction. With my head down and a great 300 metres of ebbing waves, I sprinted/splashed on my bounce boots ( speed up to 20 kmh). As I ran, I saw and heard people watching, shouting and cheering. Right at the end of my burst of speed, and coming to the end of the 300 metre run, I came upon a group of some 15 Australians. They gave me a cheerful round of applause!

It was the first time I was acknowledged this way. I was moved to tears, as I was present to 15 Australians honouring a human being flying a Romanian Flag . I found out later a few of them wondered what country the flag represented! 🙂 DIALOGUE! WORLD PEACE BY TUESDAY 15 SEPTEMBER 2020 #ITSATUESDAY#WORLDPEACETAKEOFF

Well surely a goal can be as lavish and creative as one chooses with likely goals, accidental goals and dreamy goals all being possible? Aaah, you mean a dream grounded in reality? Maybe or it may be a VISION one shares and enrols others into playing for it?

My goal for the GLOBAL HASHTAG GAME called #ITSATUESDAY (wailed by anyone working that day), is that all 195 country’s female leaders go on camera for the WORLD PEACE TAKE OFF PARTIES! PASS IT ON! YOU’RE IT!

Peace be with you all reading this blog today!

*Using the latest information, Charles Crawshaw has bounced/run ONE THIRD of the way of around planet earth and climbed Mt Everest 3 times.

A Big Thank You to Cheryle for letting me write these blogs around her cards, which I am consulting happily!!!

Please buy these wonderful “HAPPINESS ORACLE CARDS by Cheryle Teni; especially if you would like to FORWARD HAPPINESS for yourself and others:

PASS IT ON! YOU’RE IT! is our famous catch cry!

Born in Great Yarmouth, Norfolk, United Kingdom in September 1963, Charles started his personal development in October 1993; by learning something new, through a top training and education company called Landmark Worldwide.

New skills, new possibilities, new views on life, new ways of being and so much more have all been grown and expanded, with his ongoing participation. There are remarkable and inspiring courses for our young people (8-12-year-olds) and teenagers (13-18) which underline Charles’s passion for sharing this work with younger generations.

Future based training; breakthrough thinking and digital disruption are all embraced in his blogs, with his recommended courses pointing to many sources; including Landmark Worldwide and online, through Six Figure Mentors.

Charles thanks you for taking the time to read his blogs and, as taught to him by a 10-year-old boy called Reuben: